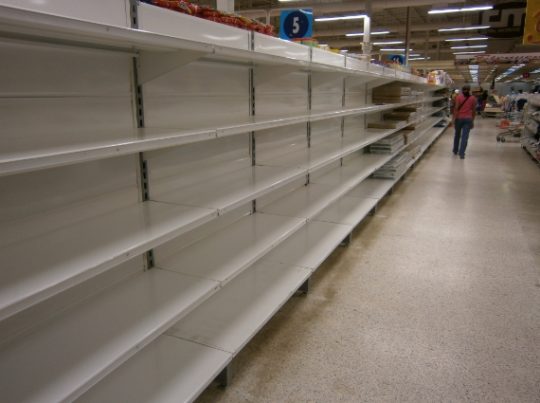 The next time a liberal democrat tries to make a case for big government and the redistribution of wealth, kindly point them towards Venezuela, where they can live in their own dull, bleak utopia. Food lines stretch on for miles, and widespread poverty, rationing of epic proportions are quite common. It is all directly linked to an all-powerful regime and the centralization of authority; principles that the American left are always fighting for. Why they don’t just leave America alone and go live in their Venezuelan paradise?

Earlier this week, Father Jose Palmar, who is not only a controversial priest but also an outspoken critic of Venezuelan President Nicolas Maduro, posted to social media a picture of a plastic bag in a garbage can labeled “comida,” which translates to food. According to the post, Father Palmar did this to help Venezuelans find food more easily and “with dignity.”

If searching through the trash for food is considered “dignified” in Venezuela, then what on earth does it look like when dignity is completely gone?

It’s sad and unfortunate, but this is now reality for the Venezuelan people. Since last year, research has shown that an increasing number of people are beginning to rummage through the trash for food because of how difficult it has become to purchase food at the store. The process is not only extremely time consuming, but there is also a very limited amount of food available for purchase. It’s not like America where we can go to the grocery store and fill our carriages with as much food as we want. In Venezuela, the food rationing is so bad that the clerks will explicitly tell you at checkout what you can and can’t purchase.

According to Venezuela’s Living Conditions Survey, almost 75% of the population lost an average of 19 pounds in 2016 as a result of malnutrition and food shortages. The survey also indicated that 82.2% of Venezuelans consider themselves poor because of their incomes, and 93% said that they don’t have enough money to buy the amount of food that they need. Additionally, just fewer than 80% said that they eat breakfast in the morning and 32% only eat two meals per day. (RELATED: Infants are now starving to death in Venezuela).

Given the fact that history tends to repeat itself, is it really so far-fetched to assume that America could one day be facing the same challenges? Big government is not just something that has a negative effect in some countries and a positive effect in others. While individual liberty and free enterprise are the ingredients for a flourishing society, government interference can, over time, lead to conditions much like the ones the Venezuelans are experiencing right now. And for the past eight years, America has seen nothing but government interference.

To give just one example, when Barack Obama and the unelected bureaucrats inside of the Environmental Protection Agency launched an all-out war on American farmers, the process of growing food was made even more difficult than it already was. In the summer of 2012, when Obama was on a bus tour across rural America, the former president was confronted numerous times by farmers who were concerned that big government policies would regulate them out of business. As a matter of fact, the National Cattlemen’s Beef Association predicted at the time that Obama’s proposed regulations “would cost 114,000 jobs nationwide and increase retail meat prices more than three percent.”

Of course, this is not nearly as extreme as the government overreach in Venezuela, but this is where it all starts. If these policies continue to be put in place, Americans may one day, decades from now, be waiting in food lines and scavenging for food as well.